Electric visionary aircrafts (EVA)sets up base in Toulouse

Toulouse, capital of the transport of the future

Toulouse Métropole has confirmed its ambition to become the European hub of the transport of tomorrow, weaving together a robust new business ecosystem in this field. The start-up Electric Visionary Aircrafts (EVA), who designs electric and autonomous flying vehicles, has set up operations in the Ville Rose, just a few months after the arrival of American firm Hyperloop Transportation Technologies. 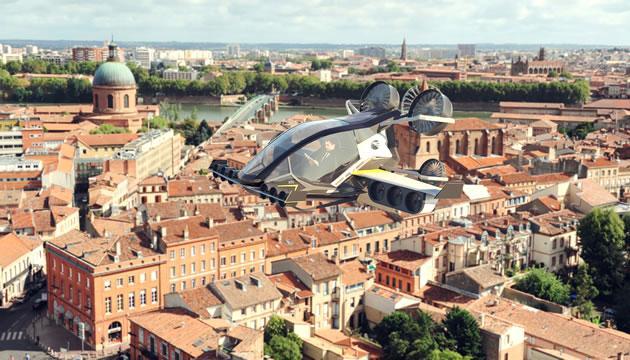 On 1st November 2018, the directors of EVA, that works on the development of VTOL (flying cars), took the decision to base the company at the Francazal site in Toulouse. They will take up residence here over the coming months in offices located at the airport’s former control tower and will also make use of a hangar to store a prototype that they will build very shortly in Toulouse. In time, this start-up aims to develop an aerial urban transport system that is electric and self-driving. The initial full-size prototype will take flight at the end of 2018 and a test phase in an urban area will take place during 2019. In late 2019 / early 2020, EVA will enter its commercialisation phase. Unlike other businesses that have been working on this innovation, VTOLs created by EVA will be accessible at street level and not simply at airports or from the rooftops of buildings. EVA will have the HTT (Hyperloop Transportation Technologies) R&D laboratory as its neighbour, the 1st centre for research and development for this Hyperloop constructor in Europe.
http://eva.xyz

Being a historic hotbed of innovation, the ecosystem of Toulouse is particularly favourable to the success of innovative projects. Project leaders effectively find, all in one place, a number of world-renowned research centres, the headquarters of major international clients, a network of start-ups that is among the most dynamic in France and a concentration of skills of the very highest order, notably in the fields of Intelligent Systems (On-Board Systems more specifically). This concentration of expertise, acquired essentially alongside developments in aircraft, satellites, automobiles and rail travel, is unique in the world.

This has resulted in a greater number of companies settling here and the development of more projects focusing on the transport of tomorrow, even more significant since 2014, and the presence today of state-of-the-art companies, such as:

Thanks to its development agency and its Invest in Toulouse team that is dedicated to economic development, Toulouse Métropole works on a daily basis to attract new gems, heading off to meet prospects at major international rendezvous based on strategic themes. At each stage of the set-up process, the company will benefit from free and confidential support from the agency that can assist them in finding premises, recruitment, sourcing financing and developing contacts. The agency can also help its employees take up residence in Toulouse.

« The business ecosystem of Toulouse - industry, laboratories working, most notably, on artificial intelligence – has never been so favourable to the emergence of new projects, a prelude to world leadership in this field. »

Olivier Le Lann, CEO of EVA and formerly of TESLA:

« I was based in Japan for 10 years. When we were looking for a base in which to develop our service, we had opportunities in California, Seattle or even in Singapore. But it was Toulouse that caught our attention thanks to a number of factors: the competence of its engineers – highly qualified -, the diversity and quality of its research centres and the support that was provided to us by the city and its development agency. Finding suitable premises, making contact with suppliers, constantly keeping an eye on our set-up process, the support we received was of the highest standard and is a real advantage to start-ups like ours. »